March 11, 2021. One year anniversary since the pandemic was officially declared here and when we were first asked to shelter in place.

Each day for the past 13 years, I have been inviting others to witness every sunrise and sunset with me, ringing a bell as a way to mark and share that moment with ever more people. This activity has been my attempt to heighten a sense of awareness of our connection to one another through the regular engagement with a reliable and indisputable fact of common experience— i.e.  the turning of the planet through the experience of sunrise and sunset.

The pandemic has provided a horrible opportunity for us all to acknowledge this interconnection. It has also shown very clearly the many ways in which our ignorance (willful and otherwise) as well as the lack of identification with all other people has continued to endanger and exacerbate the inequalities and suffering in the lives of most people on the planet.

As small, insignificant and ineffective as this daily practice of witnessing the sunrise and sunset may be in the face of such global upheaval and contentiousness, it was still necessary for me to commit to a loud, public and reliable marking of a truly universal experience and perspective during this time. Same time, same place, every day.

So, for the past 365 days we have been gathering at the end of the driveway to ring a large, loud bell at sunset every evening. Last August I drove to the East Coast to spend time with my father for his last birthday and his expected final days on this earth. In my absence, my husband, Norman Tuck, continued to drag the bell out every night so that we could maintain the commitment to reliability of SOMETHING. ANYTHING.

The tolling of the bell has signified many things at once – commemoration of those who have died as well as acknowledgment of the courage and sacrifice of the many others who made it possible for everyone else to keep going. It has afforded those within hearing range of the bell an opportunity to share the moment in the company of others- sometimes in person with masks and gongs and poetry.

In the end, I hope this activity has served as a daily beacon and a source of comfort, signaling and sharing our presence at the end of the day. 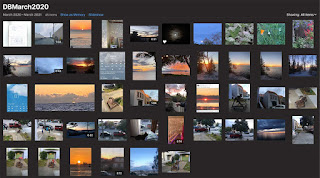 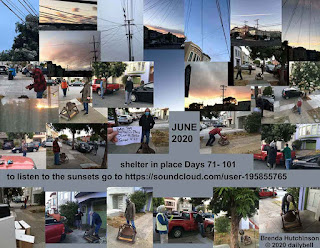 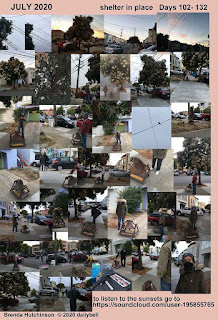 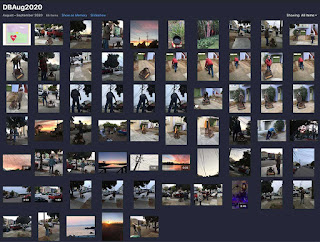 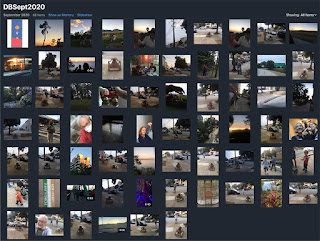 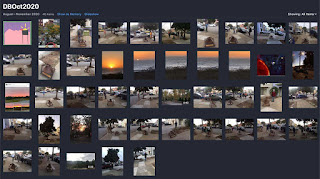 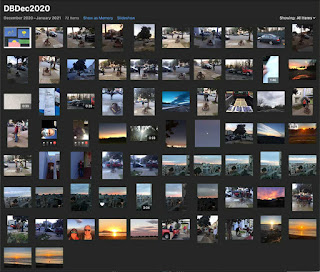 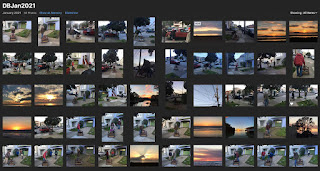 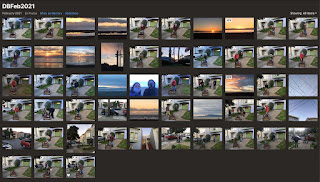 Prior to the shelter in place directive in mid- March last year and continuing throughout the rest of the year, many people were actively engaged in the dailybell project. They have contributed photos, drawings and recordings of their sunrises and sunsets. Because of the daily proliferation of documentation from the sidewalk out front of my home, the variety of offerings from other people may be dwarfed. However, because these snippets are from other people in other places doing other things, their appearance shines through the repetitive daily sidewalk photos. Many thanks and much love to everyone for your commitment. It’s been an honor and blessing to be in your company.

Rain, rain.
More rain.
A Seattle Winter Solstice,
a sunrise,
a sunset and a great conjunction.
The planets dance.
A difficult year like we could never have imagined...
is finally, ending, crashing.
Light.
Is.
~ Caterina De Re
Posted by dailybell2020 at 7:00 PM No comments:

Election day sunrise.
So many holding their breath.
The sun is rising.
Yes, it is.
~ Caterina De Re
Posted by dailybell2020 at 7:00 AM No comments:

Thick wildfire smoke descends along the West Coast.
It passes here.
The great RGB passes.
Another heavy cloud descends.
Equinox and the seasonal change, bringing changes.
~ Caterina De Re
Posted by dailybell2020 at 12:00 PM No comments: 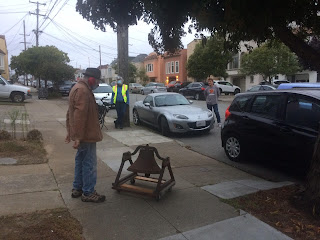 I love seeing friends and neighbors carrying on the tradition while keeping Norman company. The constant bleakness is in such contrast to the places I pass through. It’s weirdly grounding, though. Home. Day 165 Sheltering in place.
Posted by dailybell2020 at 10:38 PM No comments:

resting off the road 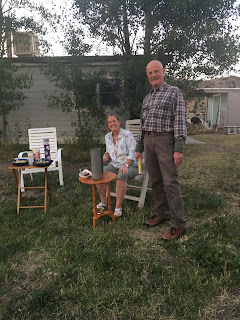 Ringing bells again with Lisa and Will at sunset, just before another delicious meal in the most spectacular venue ever. There was zero wind this evening, so I recorded Will’s bells, while adding a few little tinkly sounds of my own.
Posted by dailybell2020 at 9:26 PM No comments:

September 1, 2020. Sunset in North Crescent Bay Park in Laguna Beach at 7:15 from Elisabeth Beaird and Richard Marriott- also seeing the sun for a change. 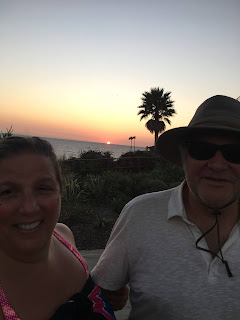